My employer jetted me off to DC for several days to attend a conference. Not one to take a food/drink/friends opportunity lying down I promptly made some calls and lined up some dinner dates. In true DC form, I made my per diem work for me and then milked my connections to get improved government access.

Friday night, I met my high school buddies Julia and Laura for dinner at Bar Pilar. A Hemingway-themed bar on 14th Street, the menu is small plates-centric (which I’m told is very DC) and the drinks are spot on. It’s fun being so much closer to the South, with Virginia just over yonder. The pork ribs and mac-and-cheese all seem more genuine despite being in as equally hipster surroundings as the restaurants I frequent in Seattle. Julia and Laura are totally what I think of when I think “young in DC”: hard-working, successful, in possession of security clearances. Obviously, they put their pants on one leg at a time like the rest of us, but what is the joy in traveling if you can’t imagine how your life would be different if you had made different choices? 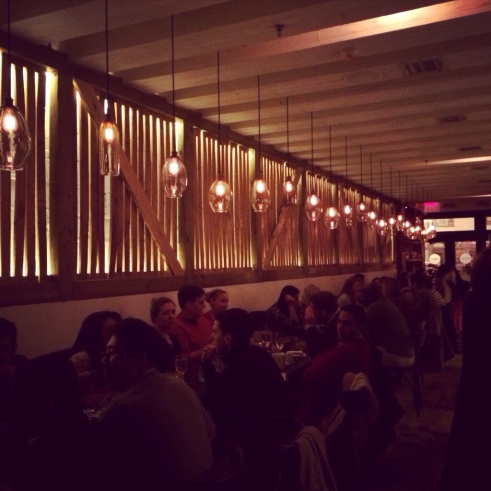 On Saturday I joined some of my favorite internet friends at Ambar in Barracks Row. A Balkan restaurant with well executed, sharable plates (DC, I see your game), we had such a great time chatting and catching up while working our way strategically through their drink menu.  Melanie had tried to convince me to skip Italy and go through Croatia and Serbia with her. I’m not saying I made the wrong choice, I’m just saying the food at Ambar gave some of my fonder Italian memories a run for their money. After dinner, I got up to use the restroom and as I was walking back to the table, I noticed that nearly every man in the entire restaurant was wearing a cashmere v-neck sweater. Virginia may be for lovers, but DC loves their structured casual.

The White House. Maybe you’ve heard of it?

Despite spending approximately 97.5% of my life being extremely unimpressed by the American government, I have to admit the West Wing is pretty damn cool. They only allow you to take photos outside of the building and in the Press Briefing Room hence the rashly snapped, poorly lit masterpiece below. Annie Leibovitz I am not. I accept my limitations. (That is my actual, real life boss though. She’s totally the cutest. We took a second selfie to impress her teenagers.)

Julia masterfully wove us through the Mess, complete with U.S.S. Constitution decor, the Cabinet and Roosevelt rooms, and the crown jewel, the Oval Office. I dutifully fulfilled my pledge to make as many West Wing, Scandal, and House of Cards references as possible. My parents paid for four years of university political science education and instead got thirty-five minutes of jokes about Olivia Pope’s wine sweaters and Frank Underwood’s ruthless pragmatism.

CJ Cregg, where you at?!

The personal highlight was the briefing room. I obviously did my best CJ impression. All the seats in the briefing room are labeled with various media outlets. The presidential press bureau assigns and reassigns the seats among themselves. The American TV giants make up the first row, larger newspapers are in the second, and smaller outlets are intermingled with international bureaus throughout the rest of the room.

Who the heck is she?

Hi! I'm Liz. I'm a bit of a loud mouth, a not-so-secret lush and I probably think you're pretty cool.

This blog began after I quit my job to spend three months traveling (highly suggested). Sharing my experiences abroad was a great way to connect with friends and family and cement memories for myself. Now that I'm back in the States I'm giving glimpses of my life at home.

Exploring doesn't require a passport but it does take a willingness to peek around the corner. What are you discovering next?

Questions, comments, and cocktail suggestions can be sent to liztakestheworld@gmail.com.